I’ve been somewhat excited about smartwatches this year. I picked up a Pebble which I liked; but the function provided fails to outweigh its form.

I followed the Android Wear announcements and nothing seemed compelling. Too big, too little battery life, too many features I don’t care about conspiring to result in a price tag that I felt was too high.

Delivered with much fanfare yesterday, the Apple Watch was hailed by Apple CEO Tim Cook as the next new exciting product category for Apple. I watched the introduction. I read blog posts and tweets of excitement and anticipation by friends and folks I respect.

I’m looking – trying to understand; but I don’t get it.

Much of the criticism that I saw (and agreed with) regarding Android Wear was about tradeoffs. That trading bulkiness and battery life for a more robust device was a poor choice for something you wore on your wrist. Well, that and the devices lacking a certain design aesthetic. Reasonable people can disagree about the design aesthetic, but it’s clear that Apple and Google both see the watch as a full, new, app-capable platform.

Both are currently bulky as they try to cram powerful capabilities into a small device profile. Both require (at least) daily charging.

Android Wear’s critics called out a lack of functional benefit – you still need to pair it with a phone1, and the watch doesn’t really do anything that the phone can’t/doesn’t already. The Apple Watch falls directly into that category (with some caveats for the new health tracking features in both platforms).

Android Wear was also criticized for it’s high cost (necessitated by the choice to make it a first class device) and we know that it’s a device that is likely to be technically surpassed annually – like all of our mobile devices.

While we don’t know the full price scale of the Apple Watch, we know it starts at $100 more than the $250 price point common on Android Wear devices. These aren’t going to be carrier-subsidized. If you want a new one, you’ll be shelling out the full amount each time.

And my guess is that each upgrade is going to be really compelling for the foreseeable future. Better battery life. A slimmer profile. App compatibility with older devices (think iPad 1).

While this is true for both sets of devices:

This is the bulkiest Apple Watch we’re likely to ever see.

(and you can add “worst battery life” and probably “most expensive” and “least capable” to that list as well), these are still the devices consumers are being asked to purchase now.

With a big caveat for health tracking features (these are great, I want them, I’m glad they are in the platforms), I’m struggling to see why I want most of the Apple Watch’s offerings on my wrist when I already have them on the phone in my pocket. 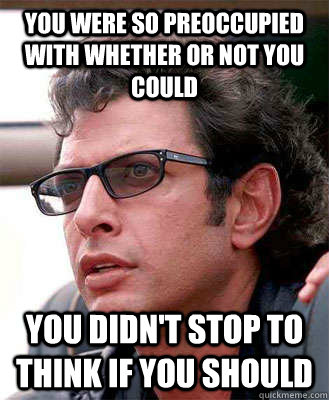 Apple Watch is definitely a more fully-baked idea/platform than Android Wear2. They’ve been working on this for quite some time. This may be what is appealing to some of the folks I (was surprised to) see so excited about the Apple Watch. I’m just really surprised to hear that people think they want this.

I get the biggest capacity iPhone each year, in part because I load around 15,000 digital photos on it (+~1-2k/year) – the entirety of my photo library. Why do I also want a copy of these photos on my watch? I can see them better myself, and show them to others better using the larger device.

Most people I know are suffering from communication overload already – do we need Yet Another Way of Messaging each other?

I’m definitely intrigued by some of the tech (and can’t wait to play with the digital crown), but I’m also reminded that we have a loss of input fidelity with each reduction in device size. I’d rather write an email on my MacBook, iPad, iPhone – in that order.

Watching the demo of how you launch an app on the phone made me cringe a little. Maybe it isn’t this bad in person, but it all looks very fiddly.

But for me it really comes down to, “what do I want on my wrist?” I like being able to glance at notifications and then leave my phone in my pocket if it’s not something I’m going to act on immediately. I like having an activity/fitness tracker. I like glance-able access to information like the current temperature or next appointment. And that’s about it. I definitely don’t want another device I need to charge daily (though if it were compelling enough…).3

Maybe in a few years we’ll see a wide range of Apple Watch offerings. From simple (and cheaper) things resembling a Fitbit or Nike FuelBand to other higher end options. Maybe that’s the long term, more interesting play. But I still don’t see why I need a fully-functional computing platform on my wrist that piggybacks on the one in my pocket.

Apple doesn’t do big new category launches lightly, What am I missing?